The New Year always encourages us to start over fresh.  We tell ourselves that it’s like blank paper on the art table. The options are limitless for what you can formulate. During these pandemic days, you can start yoga with your children.  As we plan our workouts for the forthcoming weeks, turn to nature, and at this period of change from one year to another, think of this butterﬂy. Butterflies change for the better.

What is your Chinese Zodiac sign 2021 is the Year of the Ox!

Here are some customary things that Chinese people often do in the new year.

Legend of the Chinese Calendar

According to a Chinese legend, the twelve animals fought one day about who was to head the cycle of years. The gods are requested to decide, and they held a contest: whoever was to reach the opposite bank of the river would be first, and the remaining animals would receive their years according to their finish.

On his birthday, he told the critters, there was a swimming race. The first twelve creatures across the fast-flowing river are the winners, and they’d each have a year of the zodiac named after them.

All the animals stood in a row along the river bank. The cat (cow/cat pose) and the rat (child’s pose), who had been great friends, we’re concerned because they were bad swimmers. Being clever, they requested the powerful ox (cow confronted pose) if he would carry them across the river.

‘Obviously,’ said the type ox. ‘Just Climb on my back, and I’ll take you ‘ The rat and the cat immediately jumped up and were excited when the ox soon took the lead in the race.

They’d almost reached the other bank after the rat pushed the cat into the river, leaving him to struggle in the water. Then, just before the ox was about to win the race, the rat jumped on his head and the bank to complete first.

Soon after, the tired tiger (table pose with opposite arm/leg prolonged balance, add a roar) cut his way to the river bank to maintain third place. Swimming throughout the river was an immense effort for him against the powerful currents.

The Emperor was so thrilled with his efforts he named the third year after him.

Next to reach was the rabbit (rabbit pose for older students, bunny breathing for younger students), who had not swum across whatsoever. He jumped over some stepping stone and then discovered a floating log, which transported him to the coast.

‘I will be thrilled to predict the Fourth year after you,’ the amazed Jade Emperor explained.

Just after, a kind dragon (low lunge with dragon fire breath and arms spread) swooped down to take fifth place.

‘Why did not you win the race, as you can fly in addition to swim?’ The Jade Emperor inquired.

‘I had been held up because several people and creatures needed water to drink. I needed to create rain,’ the dragon clarified.

‘Then when I was almost here, I saw a poor little bunny on a log in the water, and I blew a puff of wind so the log would float into the river bank’ ‘Well, that was kind of you, and now you’re here you’ll have the fifth year of the zodiac named after you.’

The next thing the Jade Emperor discovered was the noise of the horse’s hooves.

As he thought the horse was the next animal to get there, a sneaky snake (cobra present ) wriggled out from around among the horses’ hooves. The horse was so surprised that he jumped backward, allowing the snake to take the race’s sixth position.

The horse had to be satisfied with seventh place. Not long after, a raft came carrying the goat/ram (high lunge with arms above, hands behind the head, so elbows form horns), the monkey (monkey mirror partner pose or monkey antics ), and the rooster (stand straight, thumbs curved under armpits to make wings, walk like a rooster, make rooster sounds).

They described to the Emperor the way they had shared the raft the rooster had discovered. The monkey and goat had cleaned weeds and forced the raft into the shore. The Emperor was gratified that the animals had worked unitedly. He said the goat is the eighth zodiac animal, the night is the monkey, and the rooster the tenth.

The next animal to complete was the dog (downward facing dog). ‘Why are you so late when you’re among the greatest swimmers?’ questioned the Jade Emperor.

‘The water from the river was so clean I needed to have a bath on the way,’ clarified the dog.

His reward was to have the eleventh year called after him.

Now there was one spot left in the Zodiac, and the Emperor wondered if the last winner could come. He had almost crumpled when he noticed a noise from the boar (table pose including side cat looking towards your tail).

‘You needed a long time to pass the river,’ said the Emperor to the boar. ‘I was hungry and stopped to eat,’ explained the boar. ‘After the meal, I felt so exhausted I fell asleep.’

‘You’ve still done well,’ said the Jade Emperor. ‘The last year of the zodiac will be named after you.’

In terms of the cat, who’d been forced into the water from the rat, he eventually moved out of the water but was too delayed to have a year named after him. He felt quite cross with the rat, and cats haven’t been friends with rats since then. 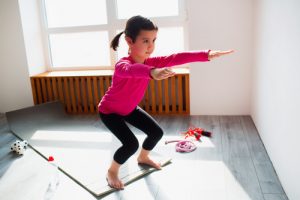 1. Squat Pose — For The Year Of The Monkey

Come back to a squat with your knees separated and your arms between your knees. Twist your hands to the floor and pretend to be a monkey sitting on a rock.

2. Hero Pose — For The Year Of The Rabbit

Come to rest upright in your heels, along with your palms leaning on your knees. Seem to be a bunny sniffing the air for food. 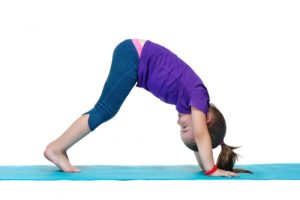 3. Downward-Facing Dog Pose — For The Year Of The Dog

Take a step back to your feet and hands in a V shape upside-down, with your buttocks up in the air, and stretch like a puppy.

4. Cobra Pose — For The Year Of The Snake

Lie on your belly and put your palms flat close to your shoulders. Pushing into your hands, lift your shoulders, and head off the ground. Hiss like a snake.

Sit on your heels, gently make your forehead down to rest on the ground in front of your knees, lean your arms along with your body, and take several deep breaths. Pretend to be a rat in the barn.

Egg (child’s pose) -The egg sticks to a leaf and is covered with a warm wax coating to keep it from drying out. This image and pose may feel soothing and protective. Ask them to breathe inside of the egg. 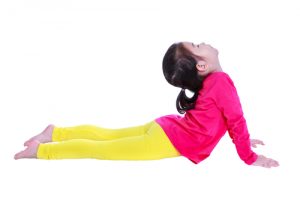 Caterpillar OM (cobra pose)– Have the kids lie down on their stomachs and discuss with them that caterpillars interact with ants by transferring vibrations. The ants guard the caterpillars, and in return, they supply the ants honeydew. Make this vibration by taking a deep breath in together and then humming with the lips closed as you lift into Cobra.

Caterpillar Crawl: Have the kids move around the ﬂoor on their bellies like a caterpillar by pulling with their hands and pushing their feet. Inform them that caterpillars move slowly! Ask, “What are you eating, though? Strawberries? Leaves? Bananas?”

Chrysalis (kid’s pose) — As the Children rest the inside of their chrysalis, ask them to envision what color their wings will be, to feel their butterﬂy legs to listen inside to see if they could feel and hear their butterﬂy breathing. You may walk around the room, placing your palms on their backs to feel their breath in your own hands.

Butterﬂy: Come to Malasana and “practice” ﬂying! As you breathe in and spread your wings as you breathe out, come back into Malasana. Ask them to recall a time that they tried something for the ﬁrst time. Some things take patience and practice. Next, have one or a few at a time ﬂy gradually in the area and ask each to tell you what color their wings are. Resting Butterﬂy (Butterﬂy Pose)- We ﬁnally end in a butterﬂy pose. You may have them imagine they’ve landed on a ﬂower and some may wish to fold forward and smell the ﬂower, and others might fall asleep resting down.

Always end your yoga with your children session with Sea Star (Savasana pose).