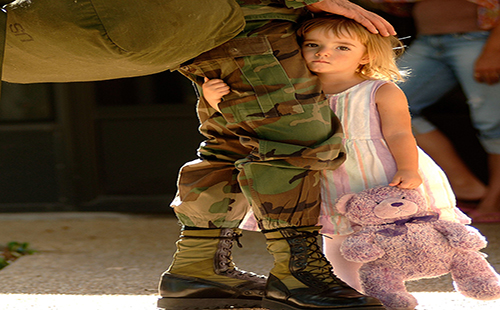 First things first, I am a mother and a wife to a deployed soldier, and I am proud of it. Secondly, I must admit that despite the immense pride I have in being a military spouse, it was very hard for me to cope with his deployment.

I was being left alone to parent our son (who was only two months old at the time) and also because I missed his emotional support. I remember getting so overwhelmed and sometimes, even feeling like a single mother.

However, I happen to be from a family with a strong military history (my dad was also in the military, and so was my grandmother) and I had my mom and my grandmother to look up to. In fact, one of the best pieces of advice they gave me was that I was not a single mother.

After all, I don’t have to fend for myself or my children financially. They asked me to think of it as a situation where I was parenting for two. Of course, this has not made things any easier for me, but this piece of advice helped me change my perspective and my attitude towards being a military spouse and mother.

With time, I have learned to cope with my situation and the rough times that often come with it.

From my experience, here are some parenting tips that will help you cope with being a military spouse and mother. These tips can also apply to fathers whose wives serve in military: According to most experts and also based on my experience, children find routines and predictability comforting. Deployment has a way of putting previous routines and schedules at risk.

In case the pre-deployment routines go with the wind, establish new ones and stick to them. The predictability of routines and schedules will help do away with uncertainty and will also create a sense of order and structure in the house.

2. Communicate With Your Children About The Deployed Parent

When one parent gets deployed, the children may feel lonely or even afraid for both themselves and the deployed parent. Although I didn’t have to deal with this problem during my husband’s first deployment, it is an issue that came up on his third deployment.

I dealt with it by talking to my son about my husband’s deployment. We talked about where he is working, what he was doing there and I even engaged him in fact finding activity about the country my husband had been deployed in.

I also re-assured him of his father’s safety by talking to him about the training that military service members get. Simply put, it is advisable to talk about the deployed parent as brushing this issue aside is bound to make the child confused and fearful.

3. Don’t Be Afraid To Take A Break And Get Help

Believe me, parenting for two is not a cruise in the ocean. There are times everything seems to be out of order. Attempting to do everything all by yourself, seven days a week will get you feeling exhausted and emotionally stressed.

With this in mind, it is important for you to have some personal time and space; take a break, relax and re-energise yourself.You could do this by hiring a sitter or even someone to help around the house and also to help you run the chores.

You could also do this by sending the kids to a friend’s house or even to their grandparent’s home for the night. Your children will love the experience plus you will also get time and space to take care of yourself and revitalise your body and mind.

With all the chaos that might be taking place in your home after one parent’s deployment, it is easy to get so overwhelmed and frustrated. Sometimes the pressure becomes so much that you snap and even end up doing things and saying things that you don’t mean.

During such high-pressure moments, it is important to close your eyes, do some breathing exercises and reflect on the situation carefully. In fact, I found that sometimes it’s better to put some issues and arguments aside until a later moment when you feel much more relaxed and composed.

5. Encourage The Children To Take Up Individual Hobbies

This parenting tip is particularly useful for those who have two or more children that are always fighting or getting into arguments with each other. You can avoid the chaos and the friction by encouraging each child to take up their own solo activities. When everyone is individually busy, they will have less time and less energy to pick up fights with each other.

However, this is not to mean that you should not have collective activities with your children. After all, you are still a family, and this should remain so. Collective activities could include going for a road trip or even just heading to the park for a family picnic.

6. Let Your Child Communicate With The Deployed Parent

Even though your husband or wife is away on deployment, they are still a huge part of your children’s’ lives. With this in mind, it is important to ensure that the children get to communicate with the deployed parent.

7. Give The Children Space To Vent Out

Yes, they may be children, but they have feelings and emotions too. For them to be emotionally stable and happy, they must be given avenues to vent out their feelings and express themselves without fear.

Give the children the freedom to criticise you and don’t let the criticism get to your head either. The more freedom the children have to express their true feelings the more, they will feel loved and appreciated. What’s more, they are less likely to misbehave. Also encourage them to adopt personal diaries or even journals.