Skip to content
Home » Do Study Drugs Work As Advertised? 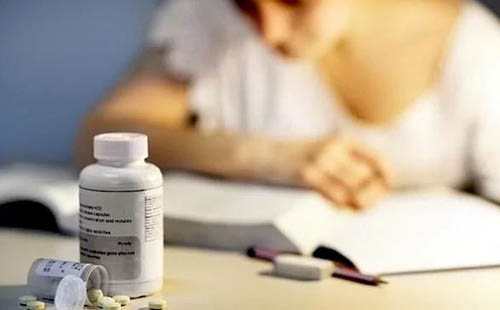 Between all the sorority mixers, club meetings, games, and internships, it’s difficult for college kids to find time to study. But what’s a girl to do when the clock strikes midnight, and she hasn’t begun to study for her 9 a.m. exam the next day?

Many college-level and high school students have discovered a dangerous solution to better and more intense concentration, it’s ‘study drugs.’

Study drugs refer to legal prescription stimulants like Ritalin and Adderall that are inappropriately used in order to increase a person’s general focus as well as productivity for the sole reason of studying better.

As a mom with two young children, working and going to school part-time, I’ve turned to prescription drugs more than once to help me get by.

But looking back now, it’s amazing to me how much I got hooked on Adderall.

To be clear, I abused Adderall.  I was never diagnosed with ADHD.

But because of my hectic schedule, I heard it could help me stay sharp, even when I was dead tired.

So it did…for a while.

Sadly, in addition to college-level students abusing Adderall, more than one out of every 20 children in the U.S. between the ages of 4-17 are diagnosed and medicated for ADHD, which is up almost 500 percent since 1991.

Prescription drugs like Ritalin and Adderall have a well-deserved reputation as ‘mind enhancers’ and ‘good-grade drugs’ that are known to create almost instant improvements in the way children pay attention and focus in school and at home. By far the most popular of these is Adderall,or dextro-amphetamine.

Make no mistake about it, Adderall is just a glorified brand of speed, meaning it’s every bit as addictive as speed as well.

Here are some cold hard facts you need to know about study drugs, including Adderall. Yes, study drugs like Adderall or Ritalin can improve your motivation and focus on getting more work done, study more effectively and concentrate better.

However, these short-term benefits come with their own set of risks.

Both Ritalin and Adderall help your brain improve its focus and concentration. Because it’s believed that people who suffer from ADHD don’t make enough dopamine in their brains, these ‘smart drugs’ help the brain generate more dopamine and therefore have a general calming effect.

For people without an ADHD diagnosis, though, Adderall is more likely to cause euphoria and/or restlessness since these individuals’ brains are already producing enough dopamine.

This is the difference between ‘using’ and ‘abusing’.

The problem is, abusing Adderall is dangerous. This is especially true if it’s used in combination with other drugs, alcohol, or on a regular basis.

In addition to enhancing your focus, study drugs can induce short-term risks such as insomnia, nervousness, and increased heart rate and blood pressure. Adderall may also cause irritability, paranoia, impulsive behavior, and even hallucinations.

Common Side Effects of Adderall

Here are just some of the more common side effects of abusing Adderall:

The worst part about continuing to use study drugs is the potential for addiction and dependence. Addiction can lead to serious health conditions and even death.

Individuals who use Adderall to study better are likely to experience a physical and mental ‘crash’ once it wears off. This so-called Adderall crash can cause depression and physical exhaustion since the body’s dopamine and energy supplies are depleted.

Many young adults and students mistakenly believe there’s little risk of actually getting addicted to Adderall. However, this couldn’t be further from the truth. I know this firsthand.

Clinical research illustrates that Adderall can, in fact, be very addictive, particularly if it’s used over an extensive amount of time on a regular basis.

Not only is Adderall addictive mentally, sometimes serious and dangerous symptoms can occur for individuals who keep abusing Adderall for several months and then try to stop ‘cold turkey’. This is precisely why it’s always a good idea to seek expert help if you’re trying to quit taking a study drug.

How Students Get Study Drugs

On any campus across the country, study drugs can be obtained quite easily since they’re legal for people with a prescription, unlike cocaine or heroin.

There are two different ways to get study drugs, either through a doctor’s prescription or from one of your peers who already has a prescription and is willing to share or sell them to you.

On many campuses, finding Adderall is incredibly easy. Chances are, some of your friends are already taking it and if you study together often, it’s likely that it will be offered to you at some point.

One health service department based in Houston claims that nearly 58 percent of all college students who abuse Adderall and other prescription drugs are getting them from their friends at school. Some students sell study drugs in order to get cash to buy food or to do their laundry.

For most hard-working college kids, staying on top of their grades is stressful. But that doesn’t mean prescription drugs are the answer.

If you think about the effects that Adderall has on a person’s mind and body in the long term, it’s likely you’ll never start taking it. It’s just not worth it in the end.

Besides, there are more healthy alternatives and proactive steps people can take in order to keep up both their professional and academic lives without the need to study drugs.

Many health experts encourage students to set aside enough time every day to relax, without their books, cell phones, or friends, and just calmly reflect on their day. Disconnect from all technology and social media, including Facebook and Twitter.

Students also need to think of their diet and nutrition as well as their sleep habits and exercise. It’s important to limit caffeine at night since your body needs sleep, even if you have an early morning test.

Study drugs may be fine for a while and will help you effectively study and cram for important tests. However, in time, they will no longer be your friend and eventually wreak havoc on your health.

I wish I could say that I never get the urge to start taking Adderall again, but if I did, I wouldn’t be telling the truth.

If I told you I wish I would have never taken it in the first place, that’s 100 percent the truth.

Life with Adderall indeed made it a little bit easier for me to chase around two small children, work a job, and go to school part-time – but I no longer want ‘easy.’